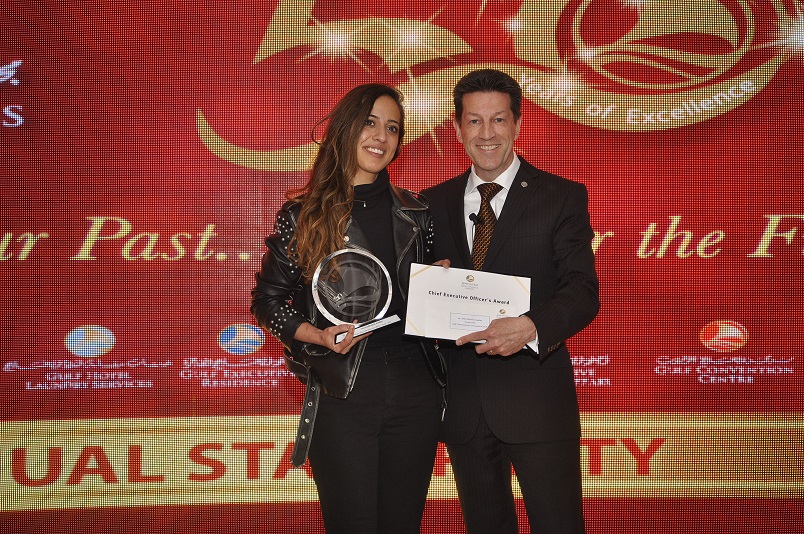 The Gulf Hotel Group’s C.E.O Award was launched last year by the Group’s Chief Executive Officer, Garfield Jones, as recognition of an outstanding contribution to the success of the company by an employee at any level of the organization. Nominations are submitted by senior corporate executives and company General Managers to the Chief Executive Officer, who judges the strength of each nomination.

At the recently held Gulf Hotels Group Staff Party the CEO Award for 2018 was presented to the Gulf Hotel’s young, talented Bahraini Chef, Tala Bashmi, who heads up the team in the Hotel’s Fusions Restaurant.

Chef Tala began her career as one of The Gulf Hotel Bahrain Convention & Spa’s management trainees and attended a leading Swiss culinary school.

In justifying the selection of Tala for the 2018 award, Mr Jones said that since completing her training program, Tala had developed her own unique style of Bahrain fusion cuisine, appeared as a guest chef in a number of renowned restaurants in Bahrain and Dubai and had taken over the reins of Fusions Restaurant, significantly increasing revenues and enhancing the reputation of the outlet and the Hotel.

He further added that Chef Tala has been actively promoting the Fusions Restaurant and Gulf Hotel on social media and has developed an enviable reputation in a very short space of time for creating exciting, imaginative dishes. “She possess an amazing vision for someone so young and without doubt has an incredible future ahead of her. We are proud to have her as part of our team”, he said.

Chef Tala commented “The Gulf Hotel have been supporting and pushing me to always strive for greatness.  Not only that, but they had the blind faith to allow me to take over Fusions with my own vision”.  She added “To be able to add to the accolades of Gulf Hotel would be an honour and I’m grateful to have the support of Mr. Jones, Mr. Fares, Mr. Charbel, and Mr. Deen from the start”